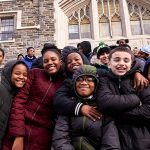 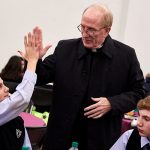 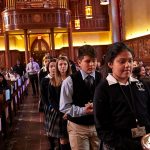 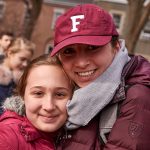 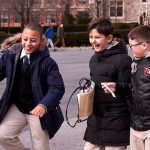 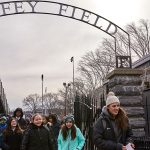 More than 1,500 middle school students from Catholic schools across New York City convened at Fordham on Jan. 28 and 30 for Catholic Schools Week. The Graduate School of Education hosted the students at Rose Hill and Lincoln Center for Mass, a pizza lunch, and campus tours.

Many of the middle schoolers are students of color who will be the first in their family to attend college, said Virginia Roach, Ed.D., dean of the Graduate School of Education. Exposure to college life can help set them on the right path, she added.

“Researchers have found that implicit sorting of children into college-bound and non-college-bound groups begins as early as middle school,” Roach said. “By hosting these children on campus, we hope to reinforce that they all can be college-bound by seeing themselves on our campus and envisioning their future at Fordham or other colleges or universities.”

Linda Dougherty, FCLC ’79, regional superintendent of Catholic schools in the Northeast Bronx, said it was especially important for the young Bronxites to see Fordham.

Right in Their Backyard

“This is a great way for them to see what’s right in their backyard,” she said. “You have an excellent university right here in the Bronx.”

At the beginning of the week, more than 1,000 students congregated at the Rose Hill campus for late morning Mass at the University Church, lunch in the McGinley Ballroom, and a 25-minute tour across campus.

Hundreds of little heads bobbed above the pews at Mass. The students, wearing their Catholic school uniforms and winter jackets, sang along to hymns like “I Want to Walk as a Child of the Light.” At the end of Mass, Joseph O’Keefe, S.J., had a few words for them.

“One of the wonderful things about Catholic schools is it gives all of us a second home,” Father O’Keefe said. “Look around this church. Think of your goodness and talents and gifts and, yes, use them to have a happy life. But [also]use them to do the will of God—to bring healing and hope and comfort, and to bring love to all of those people that God put into your life.”

After Mass, Fordham student-athletes shepherded the students to some select locations on campus: Hughes Hall’s trading room with Bloomberg terminals; the Jack Coffey Football Field; the Rose Hill Gym, home to the oldest Division I basketball facility in the country; and the Edgar Allan Poe Rock.

“Dwayne Johnson?” joked one of the middle school students.

As they drew closer to the rock—a tribute to the famed American writer who moved into a three-room cottage near campus and befriended several Jesuits at Fordham—McLoughlin continued her story.

“Rumor has it that the University Church’s original bell was the inspiration for Poe’s haunting poem ‘The Bells,’” she explained. “So he has a lot of presence on the campus. And to honor him … he has a rock!”

Others were more impressed by Rose Hill’s ambiance. Derek De La Hoz, a seventh-grader at Saint Clare of Assisi, said his sibling lives in Faber Hall. He recalled the first time his big brother gave their family a tour of the undergraduate campus.

“It was like paradise. It’s so peaceful,” said the younger De La Hoz, who said he lives in Country Club, a mixed-income neighborhood in the Bronx. “You can hear the birds chirping.”

The day ended in the McGinley Ballroom, where students were treated to a slice of pizza and a plastic zipped file folder filled with a Fordham adhesive card holder, a printout of Edgar Allan Poe’s poem “The Bells,” and a sheet explaining the Science and Technology Entry Program (STEP), Fordham’s enrichment program for middle and high schoolers.

“Make sure you come here for college, alright?” said Joseph. M. McShane, S.J., president of Fordham, to a group of students from Sts. Philip and James School. “We’re your neighborhood school.”

Isabella Batista, a wide-eyed sixth-grader at Saint Clare of Assisi, was sitting in the ballroom with her classmates.“This school is so big,” she said. “I went to the buffet and I can’t believe when you’re in college, you get to eat anything you want.”

Batista says she has a cousin who is currently enrolled at Fordham and loves it. Someday, Batista might apply here. But for now, like the rest of the students who visited Fordham this week, she said she’s taking things one step at a time.

“I think college is about getting ready for when you’re all grown up,” Batista said. “And starting your own life.”