skip to main content
Return to GSE
You are at:Home»Inside Grad Ed»Features»‘You Are Tomorrow’: Fordham Class of 2022 Invited to Transform, Lead the World

That joy, along with a few heartfelt goodbyes, was on display on Saturday, May 21, as Fordham celebrated its first full University Commencement since 2019. Graduates from all nine of Fordham’s schools filled Edwards Parade, along with families, friends, alumni, and faculty.

The Rev. Dr. Butts, longtime pastor of Harlem’s historic Abyssinian Baptist Church, told graduates that their Fordham education is transformative—a “tool” to help turn them into leaders of great character.

“And one of the great things about character is that it teaches us to nurture our love for beauty. It teaches us to endure to the end, it teaches us to have courtesy for the other,” said Butts, who received an honorary doctorate of divinity at the ceremony. “I don’t mean just opening a door and tipping your hat—I mean recognizing that all men and women are brothers and sisters in this world.”

Butts asked the students to think about what education should do.

But Butts told the graduates that they were examples of those who put character first, and that they “represent the hope for America. He said that despite the challenges faced by this country, their education was “the tool that will help you to press our nation forward—backward, never; forward, ever.”

“Education and faith are the Tigris and Euphrates of our redemption, twin rivers at the source of our liberation,” said Butts.

He left the graduates with an important message for them to use in their next chapters.

“We are tomorrow. You are tomorrow,” he said. “And this degree from one of the greatest universities in the world gives you what you need to fight against the forces that would try to push us back.”

Joseph M. McShane, S.J., president of Fordham, acknowledged that the graduating class has already faced some of those forces Butts referenced, during their time here at Fordham—including the pandemic “that turned your lives upside down, a national reckoning with the sin of racism, political polarization and disruption, the Russian invasion of Ukraine,” and more.

“Good Lord, after going through all of that, all you wanted today was a typical Fordham Commencement, and yet, I have gone off-script by telling you that I am going to speak to you about the burden of being a Fordham graduate,” said Father McShane, who was celebrating his final Commencement as University president. “Bear with me. One last time.”

“What exactly is this burden? Nothing less than this: transforming and redeeming the world,” he said.

While this might sound like too much, Father McShane told the graduates that they are ready and specially positioned to fulfill this challenge.

“You’re smart. You sparkle with talent. Those talents allow you to shine, to dazzle, to amaze, to do good—immense good,” he told them. “You have responded to all the challenges the world, and we, put before you to expand your reach, widen your horizons, and deepen your understanding of the human enterprise. You have strong moral compasses. You have shown a deep and abiding desire to live lives of integrity and service. Therefore, I believe that you are well-suited—perhaps even uniquely suited—to take on and transform the world.” 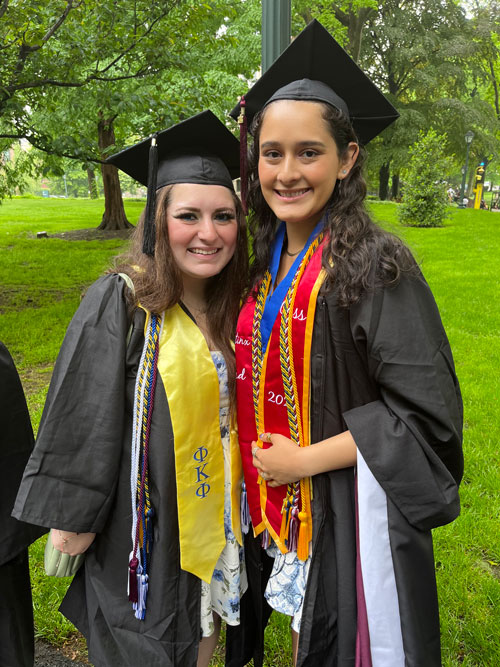 For Geraldine Romy Riveros, the Commencement ceremony was a fulfillment of the life her parents dreamed of for her.

“I’m a first-gen (student)—my parents came to this country in their 30s,” said Romy Riveros, a Fordham College of Rose Hill graduate. “They left their countries because of terrorism and lack of education so they came here so I could have a better opportunity, so I feel like this is me achieving everything that they dreamed for, taking advantage of all the opportunities I was given.”

Romy Riveros took advantage of as many opportunities as she could at Fordham, becoming a double major in international political economy and Spanish language and literature and double minor in humanitarian studies and women, gender, and sexuality studies, and currently has a job working at Amazon as a marketing specialist. 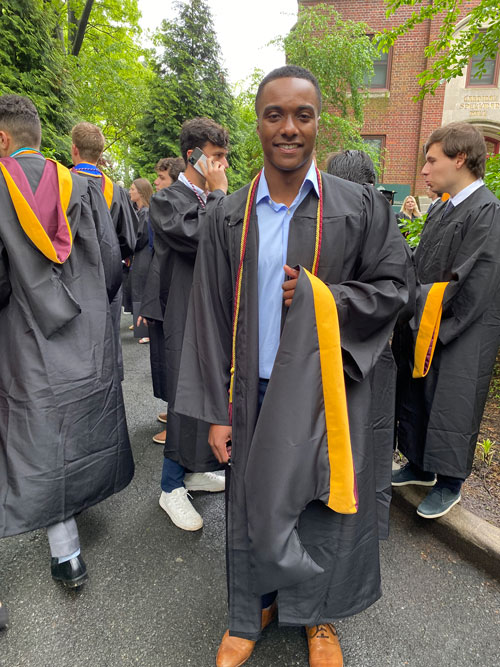 Jonathan J.M. Haynes, a graduate of the Gabelli School of Business who majored in finance, is moving to San Francisco to work at JPMorgan Chase & Co after graduation. His initial goals when he entered Fordham changed slightly.

“I came here to play football, played for a month, stopped after that, and then stayed for the business school,” he said.

Haynes said he’s grateful for his mother and family for his college experience.

For Leslie Abreu, a 2022 graduate of Fordham College at Rose Hill who is in the five-year accelerated master’s teaching program at the Graduate School of Education, her childhood growing up in the Dominican Republic inspired her to pursue a career in education.

“I always went to the teachers in the morning session with the little kids, and I would just help them out,” she said. “I feel like I’ve carried that over here. It felt natural to me to be an educator.”

Abreu said she’s pursuing a certification in bilingual education for grades one through six. 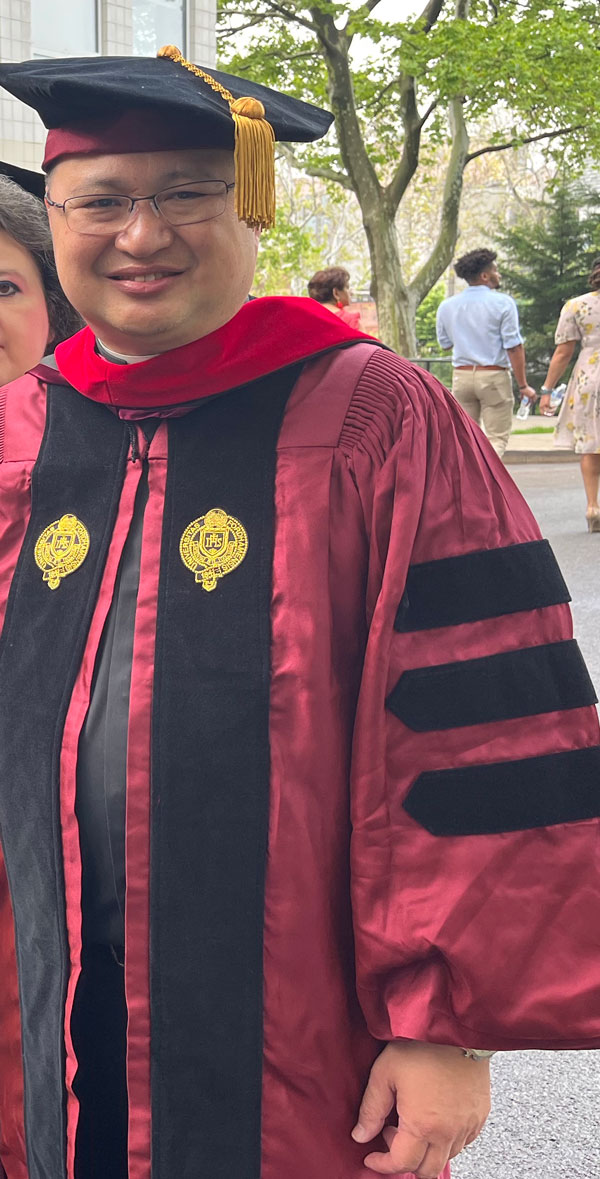 Putting Their Education into Action

Ernesto Cordero, pastor in the Archdiocese of Los Angeles, received his doctor of ministry degree from the Graduate School of Religion and Religious Education.

“It’s really helped me in the practice of my ministry. It helps me in the manner of my service to my people,” he said.

Caroline Sullivan, who got her master’s in education, did her student teaching during the pandemic in a preschool class at the Dwight School in Manhattan.

“​​It’s definitely been tough teaching in the pandemic, but I honestly think it’s given me the tools to be flexible and teach in any type of environment,” she said.

Sullivan said she was grateful to her professors at Fordham, particularly her adviser Marilyn Bisberg, for helping her navigate these uncertain times.

“She’s been so helpful and has taught me so much about education,” she said.

A Return to Some Normalcy 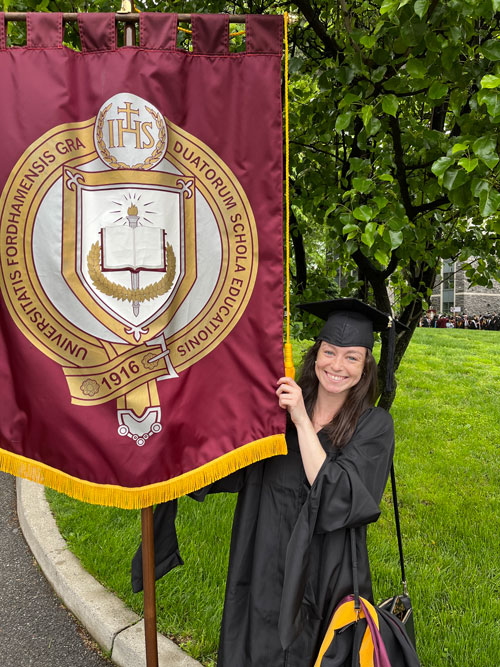 Fordham College at Lincoln Center graduates Maggie Franzeb, Sarah Hickey, and Francesca Seeman reminisced about how they became friends as they waited to walk across the stage. Franzeb, a native of Rumsen, New Jersey, and Hickey, who is from Bay Shore, New York, met during the pandemic, when they both were taking on online class called The Philosophy of Kant.

“We were all on Zoom, and we were in another class the following semester,” said Hickey.

“I said we have to meet up, and we finally met up in person. It was so fun. I love telling the story, because everyone’s like, ‘that’s great, you made friends through Zoom University.’”

For Fordham College at Rose Hill graduates Steven Ruggiero and Alexander Di Fiore, their favorite memories of Fordham were this last year, which resembled a semblance of normalcy after two pandemic-filled school years. 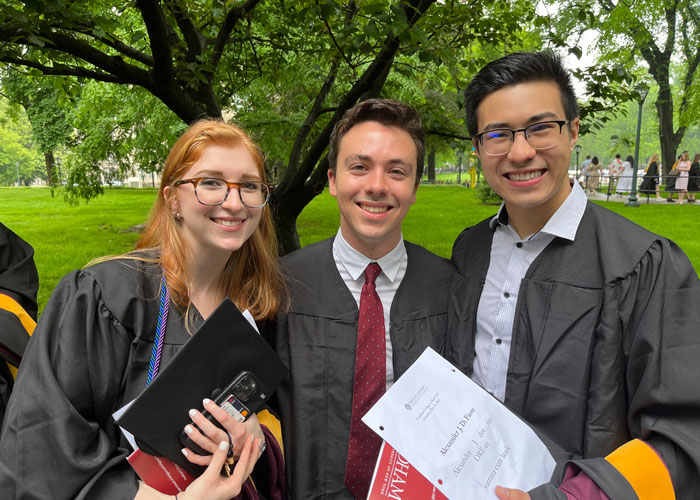 Including the students who received their diplomas today, Father McShane has bestowed approximately 75,000 diplomas during his 19-year tenure as University president, according to Board Chair Bob Daleo.

Daleo announced that the board had unanimously voted to elect Father McShane president emeritus “in recognition of his transformational leadership and exceptional stewardship of our beloved University.”

“I hope you will join me now, rise, give him applause as we send him off with deep gratitude and wish him Godspeed as he begins his next great chapter,” Daleo said, to a round of thunderous applause and a standing ovation from the thousands in attendance.

The ceremony was also the last for Donna Rapaccioli, Ph.D., as dean of the Gabelli School of Business. For more than 15 years, Rapaccioli has served as a dean of business education at Fordham, helping to expand both the undergraduate and graduate programs—including the addition of a doctoral program. Rapaccioli has served as the dean of the unified undergraduate and graduate Gabelli Schools since 2015.