Early on in the pandemic, as New York became the hotbed of coronavirus outbreaks, one of the greatest issues was the lack of personal protective equipment (PPE) for essential workers. Many efforts were organized to get needed supplies—especially face masks—to the state. While some of the donations were loudly broadcast, other major contributions were also being made. One such effort that bridged the gap between China and the United States was orchestrated by Fordham Graduate School of Education alumna and President of the former School of Education Alumni Association, Rosemary J. Faruolo-Uzzo, Ed.D. (GSE ’69, B.S. ’61).

Faruolo-Uzzo has many ties to China through her experience as an educational consultant and her efforts to bring The Basics program, developed by Harvard University scholar Ronald F. Ferguson, Ph.D., to China. In 2011, she lived and worked in Qingdao. During her many trips to China, Faruolo-Uzzo lectured at universities in Beijing, Wenzhou, Shenzhen, Shanghai and several other cities, building connections and bridging pathways for Chinese educators to Yonkers, NY, where she resides. Partnerships she forged include those with several educational organizations across China, including the Natural Intelligence Alliance of China, Dingsheng Education, New World International Kindergartens, and Shenmo Mental Math.

A colleague Faruolo-Uzzo met during this time was Xiuli (Tina) Chen, a senior lecturer at the College of Global Talents at Beijing Institute of Technology, Zhuhai. Given the pandemic plight that China was going through, as well as the emerging virus situation in New York, Chen reached out to Faruolo-Uzzo to say she could provide a contact to obtain needed PPE. This contact was Jackie Ni, a former student of Chen’s who now resides in Irvine, CA. Ni had started Supply Crate, a non-profit organization that facilitates PPE donations between donors and organizations in need.

As a result of Faruolo-Uzzo’s efforts, 16,000 face masks were shipped to Albany, NY to be dispensed under the direction of the New York State Department of Health and Human Services. Additionally, she secured 2,000 face masks which she brought to St. Joseph’s Hospital in Yonkers, and several hundred disposable masks which she provided to the 3rd Precinct, Yonkers Police Department. In May, with the help of the 3rd Precinct, Faruolo-Uzzo also donated and distributed masks as part of a PPE giveaway in the South Broadway Business Improvement District in Yonkers. In July, she coordinated a 2,000-mask donation to Southern Westchester BOCES, where she is an instructor in adult education. 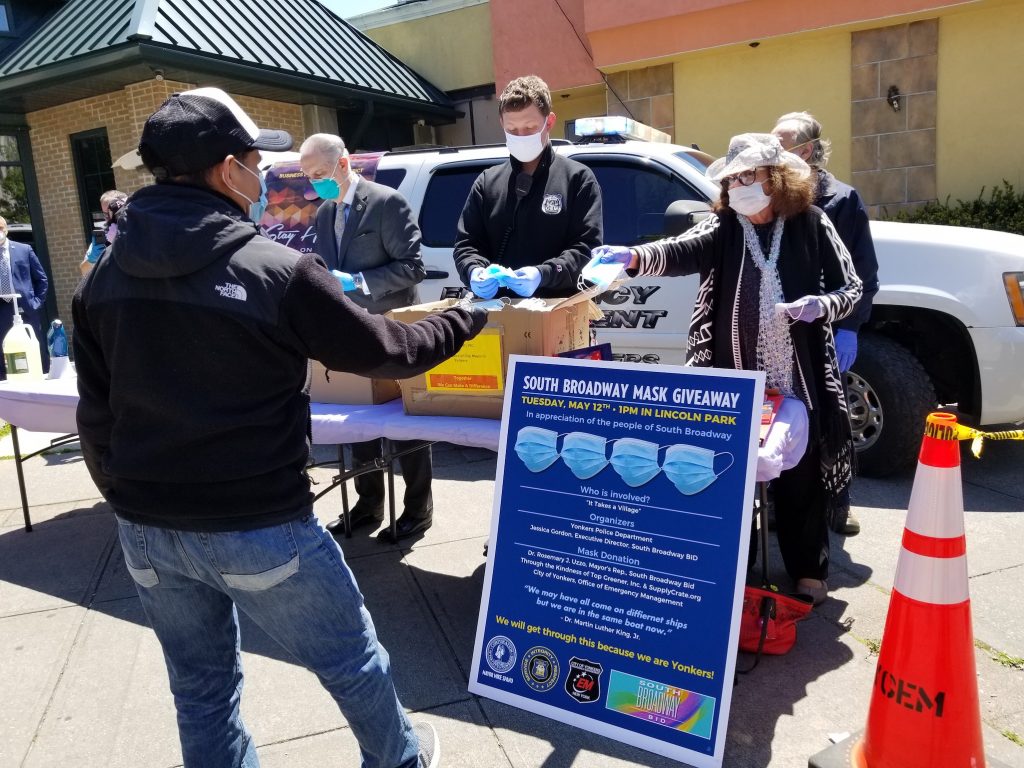 South Broadway Business Improvement District rallies around Dr. Rosemary J. Uzzo as she distributes 3,000 masks to children and residents in that community.

Known for her altruistic and varied life, this was not the first relief effort led by Faruolo-Uzzo. In 1976, she was heavily involved in volunteer efforts in Sonsonate, El Salvador, where she worked with children in the Aldea S.O.S. orphanage. Faruolo-Uzzo’s work was featured in Fordham Magazine as a way to encourage donations that could be funneled to the children. It also resulted in several of the orphans being adopted by GSE alumni.

“My relationship with my work has always been deeply intense, and had its own life driven by passion, its own history of unpredictable forces, and an inner voice which constantly played the words of Horace Mann: ‘Be ashamed to die until you have won some victory for humanity’,” Faruolo-Uzzo said. “This quote has become my beacon, and in this case inspired me to take initiative without fear of becoming a victim of the coronavirus and to take action in my community during its time of need.”