skip to main content
Return to GSE
You are at:Home»Community»Ashley Rodríguez, GSE ’20: A Ph.D. Grad from East Harlem
Photos courtesy of Ashley Rodríguez

The Lincoln Center campus where Ashley Rodríguez earned her doctorate isn’t far from her home in East Harlem, but sometimes it seemed like a different world. That didn’t stop her, though.

“A lot of people with Ph.D.’s don’t look like me, or sound like me, or have a name like mine,” said Rodríguez, a doctoral candidate at the Graduate School of Education who will be the first in her family to have a Ph.D. “I want people to know that just because I’m this little girl from East Harlem with a family that isn’t the most educated doesn’t mean that I don’t belong.”

For Rodríguez, East Harlem has always been home. In the summers, she spent her weekly allowance on snacks from a little blue truck near her building that sold microwaveable cheeseburgers and juices for a quarter. Sometimes, the local Icee man gave her free ice pops.

When Rodríguez was a little girl, she wanted to be a medical doctor. Her parents aren’t technically immigrants—her mother, previously a substance abuse counselor, and her father, a construction worker, were born in Puerto Rico—but her family held onto the “immigrant dream” and hoped to see their daughter get a medical degree one day, she said. Little did her mother know that she was inspiring her daughter to become a different kind of doctor.

For many years, Rodríguez’s mother worked as a substance abuse counselor at Rikers Island. Her clients were imprisoned for drug possession, scamming, theft—sometimes worse. When they were released from Rikers, they often ran into Rodríguez and her mother in their neighborhood.

“I remember seeing how happy they were to see my mom and give her updates on how they’re doing well and how they’re committed to their programs [to stay sober], and now they’re clean,” Rodríguez said. “I remember just feeling so impressed by that—how much of an impact my mom had on them and feeling like I wanted to be in a similar position.”

Rodríguez, now 27, wants to be a psychologist for children and their families. She will graduate this May with her Ph.D. in school psychology from the Graduate School of Education, where she also earned her master’s degree in the psychology of bilingual students in 2019.

She came to Fordham because she wanted to work with Giselle Esquivel, professor emeritus of the Graduate School of Education, who was known for her work in bilingual psychology.

“Unfortunately, she was very sick by the time I got into Fordham, and she actually passed away,” said Rodríguez. “But I remember feeling how Fordham really emphasized culture and language and practiced what they preached.”

In Rodríguez, Equivel’s work carried on.

A Hard Pill to Swallow

Over the next six years, Rodríguez served as a psychology intern and extern in organizations across New York City, including the Lincoln Medical and Mental Health Center in the Bronx and the Harlem Child Development Center. She has provided therapy and conducted psychological evaluations for many clients, from infants to adults, with neurodevelopmental disorders like autism and ADHD.

Sometimes, the possibility of a diagnosis is a hard pill to swallow. There was one mother, recalled Rodríguez, who refused to accept her son might be autistic. Her oldest son is nonverbal and autistic, but because her younger son could speak, she believed he couldn’t be autistic, too.

“To accept the fact that your child is on the spectrum, in some ways, is like mourning the potential of your child,” said Rodríguez. “Every parent has a dream or vision of how their children are going to be. And I think her defensiveness was really because she wasn’t open or ready to accept that her other child also is on the spectrum—and what does that mean about maybe her as a parent, or what does that mean about this child’s opportunities and the child’s potential?”

After a year of working together, the mother allowed Rodríguez to refer the boy for a psychological evaluation. Rodríguez’s supervisor later confirmed that he had autism, she said.

“Not knowing is so difficult. Not understanding why their children are behaving the way they are. And when they have an answer and they have more information, I’ve noticed—sometimes, not always—they feel a little comforted or reassured by that,” Rodríguez said.

“I really love working with people of color and seeing them feel less stigmatized by their diagnoses. There’s a lot of misinformation and stigma behind mental illness. I think that’s a global problem, but it’s even bigger for people of color,” said Rodríguez. “Especially working with Latino populations, I’ve heard a lot of myths and misconceptions and hesitations around therapy. I hope to show people that a lot of those misconceptions are incorrect and that therapy is not for crazy people—therapy is useful for everyone.”

Through Fordham, Rodríguez also traveled to Kenya in 2019 and mentored children. She was accompanied by several students and a longtime mentor, Diane Rodriguez, Ph.D., professor in curriculum and teaching at GSE (to whom she shares no familial relation). For several years, Ashley served as Diane’s graduate assistant. They co-authored a peer-reviewed article in the journal Insights into Learning Disabilities in 2017. That year, they were supposed to co-present their research at the New York State Association for Bilingual Education’s 40th anniversary conference in Westchester County—the first professional presentation for the younger Rodríguez. Diane was unable to attend the conference because her father became very ill, so Ashley presented alone. 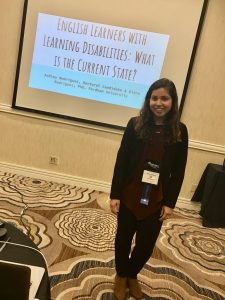 “It was her first time, and I wasn’t there with her to support and guide her … But then my colleagues who went to see both of us were sending me these fantastic, raving emails about how wonderful my graduate assistant was at presenting the data,” said Diane. “As faculty, what you want to see is how your students grow and become these outstanding professionals and do the job better than you. She’s one of those people.”

After graduation, Rodríguez said, she will become an adjunct instructor in bilingual assessment at GSE. She will also continue to work at New Alternatives for Children, a child welfare agency in New York City, where she currently serves as a paid psychology intern. Next year, her title will change to postdoctoral psychologist and she will earn a salary instead of a stipend.

The COVID-19 pandemic has switched the therapy sessions she does there from in-person to virtual, and it’s not the same—especially for her young clients.

“I’m hoping that my clients see that even through there’s a pandemic, I’m still there for them,” she said.

When Rodríguez receives her Ph.D. in a few weeks, there’s one person who won’t be around to witness it: her abuela. Rodríguez was close to her grandmother, a woman named Petra Soto, since she was born. Soto was a homemaker who went to school until second grade, when her mother became paralyzed and required constant care. But Rodríguez said she always told her abuela she would receive her doctorate, and her grandmother knew she would become a doctor before passing away three years ago at age 99.

“I know she was really proud that I’ll be able to serve our community,” said Rodríguez.