skip to main content
Return to GSE
You are at:Home»Centers and Institutes»First Scholas Chairs Congress in US Hosted at Fordham
Photos by and courtesy of Scholas Occurrentes, Taylor Ha, Tanya Hunt, and Jeanine Genauer
An international community of scholars and faith leaders congregated at the Lincoln Center campus from June 2 to 4 for the fifth International Scholas Chairs Congress.

Hosted by the Graduate School of Education’s Center for Catholic School Leadership and Faith-Based Education at Fordham, the three-day conference brought together more than 100 people—researchers and academic members in the Scholas Chairs program as well as religious, diplomatic, and government leaders—to discuss how education can be used as a tool for social change and harmony across the world.

The annual conference is spearheaded by Scholas Occurrentes, a global educational initiative formed by Pope Francis that aims to create positive change in schools and educational communities across more than 190 countries. Gerald M. Cattaro, Ed.D., director of the Center for Catholic School Leadership and Faith-Based Education, is a Scholas Occurrentes ambassador who oversees the three designated Scholas Chairs in the United States—at Fordham, Minnesota University, and John Carroll University.

In years past, the event has taken place in locations abroad, including the Vatican City and Jerusalem. For the first time in its five-year history, the conference was held in the United States this year.

Over the course of the conference, scholars from around the world, particularly South America and Europe, presented papers and panels on educational initiatives and projects focused on innovative education, environmental and social sustainability, and inter-religious dialogue aimed toward sustainable peace. Selection of those three topics emerged from conversation among young Scholas students—university students from different countries who aim for social change in their communities—as well as Pope Francis’ encyclical letter Laudato Si and the United Nations’ sustainable development goals for 2015-2030.

One of the biggest themes that emerged from the conference was the need to have mutual understanding and dialogue with those of different religions and cultures. The focus of education should be to make our young people more human—not just more educated, Scholas representatives said. 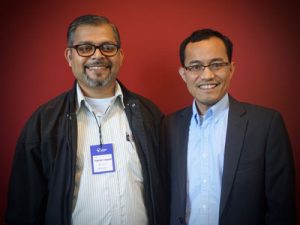 “The Scholas Congress is particularly relevant because it provides a great opportunity for discussion about how [we]can promote this year’s theme: educating to fraternal humanism to build a civilization of love,” said Vincent Fernandes, S.J., a doctoral student in GSE’s administration and supervision program for church and non-public educational leadership. “It gives us a roadmap for what we all need to do, and it is inspiring to know what I as an individual can do to help.”

In a written message from Pope Francis recited by Archbishop Angelo Vincenzo Zani, secretary of the Congregation for Catholic Education, the pontiff thanked Fordham and Scholas academics for their work.

“I want to thank all the participants for these days, for their knowledge and shared theories, but above all for the experiences, for being open to listening to their communities, for savoring its sweetness and bitterness, for creating meaning from it and thinking together how to recreate those communities by harmonizing the three languages: heart, head and hands,” he said.

On the last day of the conference, the scholars gathered around the Lincoln Center campus’s sunlit plaza that overlooks the Upper West Side. For a few moments, the crowd fanned out and clasped hands with one another. Then they assembled around a young olive tree, gifted to Fordham by Pope Francis in honor of the conference—a symbol of peace and friendship.

In a short ceremony, they watched leaders of different religions give an inter-religious blessing. A young boy and a few Scholas participants then nurtured the plant with new soil. The olive tree will be taken to the nearby New York Botanical Garden, where it will stand beside a plaque blessed by Pope Francis with the words, “This plaque was blessed by His Holiness Pope Francis on March 21, 2019, on the occasion of the V International Symposium of Scholas Occurrentes at Fordham University.”

“As the symposium ends,” said Gerald M. Cattaro, Ed.D., in his closing speech, “I believe we all have the same feeling … that people are exploring the dream of global citizenship.”