Approximately 100 Catholic educators from the New York tri-state area gathered May 30, 2018 to celebrate the 11 recipients of The Center for Catholic School Leadership and Faith-Based Education’s Award for Excellence in Catholic Education.

Gerald Cattaro, Ed.D., Executive Director of The Center for Catholic School Leadership and Faith-Based Education, served as Master of Ceremonies and noted that the event was held in part to recall the memory of Cardinal Avery Robert Dulles, S.J., who would have celebrated his 100th birthday on August 24. Cardinal Dulles, an internationally known author and lecturer, was the Laurence J. McGinley Professor of Religion and Society at Fordham University from 1988 to 2008. He wrote 25 books and hundreds of articles and essays, setting an example for scholarship well into his 90th year. 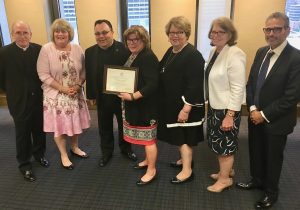 “Faith seeking understanding defines the mission of the theologian as it was consistently defined in the life of Avery Dulles, whose intelligence, integrity, fairness of judgment and lucidity of style set a high standard for theologians,” stated Professor Cattaro. “Tonight, we take time to honor our high schools and in particular their religious education programs and religion teachers, who on a daily basis live out the legacy of Fr. Dulles, whose motto was Scio Cui Credidi (“I know him in whom I have believed.”) 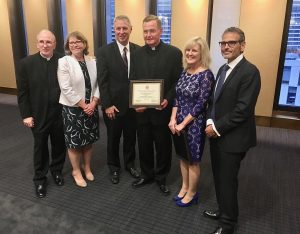 In recognition of Cardinal Dulles’ example and the value of Catholic education, Cattaro presented awards to the following schools in each of the five New York dioceses below: