skip to main content
Return to GSE
You are at:Home»Centers and Institutes»Catholic School Leaders Stress Unity Through Integration, Education, Diversity 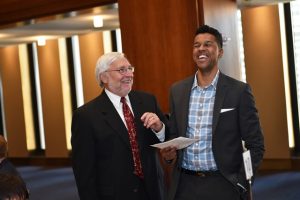 Combating discrimination and prejudice in schools is crucial in building unity among all people and creating a just society said the editor-in-chief of the world’s oldest Jesuit journal.

Speaking at the 23rd annual Catholic School Executive Leadership Dinner hosted by GSE and the Center for Catholic School Leadership and Faith-Based Education, Father Antonio Spadaro, S.J., stressed the importance of unity through integration, education, and diversity among all people, regardless of faith or background.

Fr. Spadaro is the Editor-in-Chief of La Civiltà Cattolica, a Jesuit journal based in Rome that has been continuously published since 1850. He is also a Consultor at Pontifical Council for Culture and has published over 15 books, the latest Cybertheology: Thinking Christianity in the Era of the Internet was published by Fordham Press.

The key steps to unity, according to Spadaro, are integration, education, and working with diversity.

Integration, specifically in school settings and especially for immigrant, special education, and marginalized students, is crucial in unifying the people. Spadaro focused on language and bilingualism as fundamental to integration. Learning a language creates a bridge to a new culture and its people. “To help someone learn a language means to help people develop in their relationships with the world,” Spadaro said.

Education is paramount in improving ourselves, building the nation, and building the future — there is no community without education. Quoting Pope Francis, Spadaro said “our educational task must awaken the feeling of society as home. Education serves to inhabit the world as a home.” 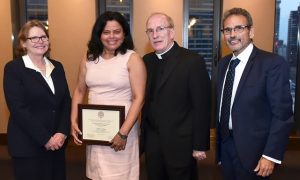 Additionally, there is no the people without working with diversity. People are dynamic and, again quoting Pope Francis, Spadaro said “the culture of a people does not consist of the frozen repetition of itself. It is an open process that tends to open, to integrate, to multiply, to share, to dialogue, to give and to receive.” Schools, he continued, must lead the way in working with diversity.

The annual leadership dinner honors people and programs who are doing exceptional work on behalf of all students and families, particularly underserved and marginalized groups. This year’s awardees included the following: