skip to main content
Return to GSE
You are at:Home»Inside Grad Ed»Features»Use Your Own Story, NYC Schools Chancellor Tells Teachers 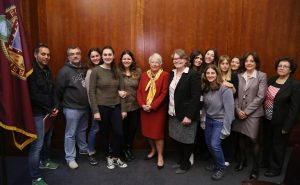 New York City Schools Chancellor Carmen Fariña told a gathering of educators on April 4 to embrace their own backgrounds and personal stories as a means to bring more joy to their teaching.

In “Paying it Forward: A Commitment to Learning and Service,” Fariña, who assumed the role of chancellor in 2014, highlighted the ways that her personal experiences during 50 years as a teacher, principal, superintendent, and deputy chancellor informed both her past and present decisions.

“Education is as much about morality as it is about education,” said Fariña, who spoke at the Lincoln Center campus. “We really need to bring that back to our schools and do right by all our kids—for all the right reasons.”

On a personal note, she said bilingual education is a high priority for her because she recalled the stigma of being the only student in kindergarten who spoke no English, having fled Spain with her family the year before to escape civil war.

Likewise, Fariña said she understands from personal experience the importance of parent involvement. Although she realized early on that she wanted to be a teacher, she started out on a track toward commercial jobs. She attributed the misstep to the fact that neither of her parents had graduated from high school, and simply did not understand how the system worked.

“If your parents have been through this and know how to do it, you’re already a step ahead,” she said.